Research in the Leffler Lab

Our research focuses on evolutionary and population genetics in humans and other primates. We apply computational approaches to diverse genomics datasets to study the origin, evolution, and functional consequences of genetic variation. We are especially interested in structural variation and variation that influences infectious disease susceptibility within and between species.

Copy number variants (CNVs), which include deletions, duplications, and more complex changes, occur frequently throughout the genome and can have major functional effects. A single copy number mutation can alter gene or regulatory element content, and/or change their spacing. CNVs affect even more sequence than single nucleotide polymorphisms (SNPs), yet they are more difficult to identify and genotype accurately and so are often overlooked.

Some regions of the genome are particularly prone to CNVs due to their repetitive content, and are difficult to characterize for the same reason. While many of these regions are known because of their contribution to disease through recurrent de novo mutations, it is thought that the propensity for CNVs at others may be evolutionarily advantageous. For example, CNVs at immune gene clusters or pathogen receptors may create new variation that challenges pathogens, such as the example shown here. We are currently working on developing methods to improve calling of CNVs in repetitive regions and incorporate them into evolutionary and association studies. We are also interested in the mutational mechanisms that give rise to these CNVs, which often involve mistakes by the recombination machinery in recognizing homology.

Non-human primates and their malaria parasites

Malaria has been an important selective pressure throughout human history and many genetic adaptations have now been discovered, including the sickle cell allele, O blood group, Dantu blood group, and Duffy-negative blood group. Non-human primates are frequently infected with related parasite species and yet we do not know whether they have adapted similarly in response. 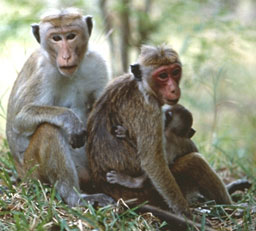 We are using population and comparative genomic approaches combined with functional data to investigate malaria infections in non-human primates and identify loci that may contribute to why some individuals and some species are more resistant to parasites than others. We are currently focusing on macaque species (genus Macaca) in south and southeast Asia, which are host to multiple Plasmodium species and differ in susceptibility. We are also analyzing sequence data for macaque malaria parasites to investigate their genome evolution and species-specific features.

Malaria-protective variation around the world

Malaria-protective alleles show heterogeneity across the world as to where they are present and at what frequencies. This is due to the influence of a combination of evolutionary forces, including mutation (where the variants arose), selection (depending on where malaria has been present and how prevalent), and gene flow (how variants have spread between populations).

We are interested in modeling these processes and evaluating genetic variation data for diverse populations to investigate how they have influenced the distribution of malaria-protective alleles. Currently, we are working together with Dr. Arwa Al Riyami and Dr. Shoaib Zadjali at Sultan Qaboos University and with Dr. George Busby at the University of Oxford to investigate how genetic variation in the Omani population has been influenced by historical admixture and malaria-driven selection, especially at blood group loci. 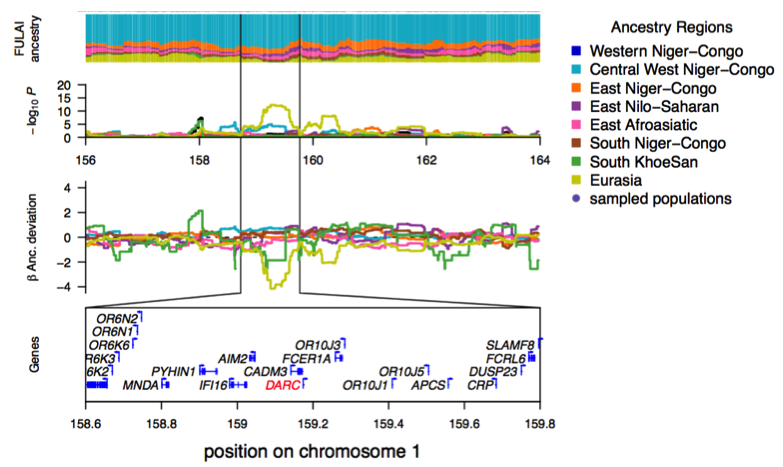